On the occasion of the Gaṇeśacaturthī, I would like to share my yogic ideas about association of Gaṇapati with yogic experience. We know, there are plenty of Gaṇeśa’s forms, they are all very important in their own way and can bring different blessings to those who perform their sādhanas. Also, there are multiple of connections of different Gaṇeśa’s forms with those or other Śiva’s and sole universal Śakti’s manifestations.

Gaṇeśa mitigates the negative influences of Ketu, as well as removes many obstacles, grants knowledge, success in sādhana and in many endeavours. Now, you can find a lot of information on this subject. However, Gaṇeśa plays a great role for those who follow the yogic path. It is said in Gaṇeśatharva-śīrṣa:

In other words, thanks to the worshiping of Gaṇeśa, the yogi is able to awaken the kuṇḍalinī-śakti in the mūlādhāra-cakra.

You (tvaṃ) are the essence (ātmaka) of three (traya) Divine powers (śakti).

There are many descriptions of the Gaṇeśa’s qualities, which actually indicate his yogic nature. And what I would like to say in this connection: whatever external worship a person may do, they can have internally different involvement of one’s energy, consciousness and heart. But, only the revelation of one’s own purest nature in one or another action and the highest aspirations basically gives the power to pūjā. I would like to give some examples showing that the Divine is what we really are. Someone can say by ignorance “Yes, but I do not have the elephant head, I’m in a human body. What is the connection with the yoga practice? ” External attributes are simply symbols of different energies, behind which is a finer and spiritual energy that permeates the whole universe with all its diversity. It is ātman, one in all forms, powers, it is within the human form in which sādhaka realises himself through yoga. That is why the Nava Nāthas (the nine founders of the different Nāth directions), on the one hand, are the famous Indian Deities, among whom there is Gaṇapati (aka Gajabeli Gadjakantharnath), but on the other, they all have human forms.

Whichever complex pūjās we perform, we always do this in the presence of our body. While we are in the body, we perform karma (an action). The body is always with us until death, it is the instrument of the soul, its temple, and what is most natural for all human incarnations. The body is also important for the yoga realisation. Few people of us know, but according to many stories Gaṇeśa was not originally with the elephant head, he gained it later. Moreover, sometimes he is the son of Śiva, and sometimes he is the supreme primordial Deity himself. This can all be food for many reflections. Being born in this world, we come from the unmanifested, obtain different energies and then return back to ourselves. We are born in many lives and forms, ultimately affirming in that beyond them all. This original reality is Gaṇeśa. There are not many temples in India with Gaṇeśa in human form. Here, for example, are several known forms of Gaṇeśa from the Śiva temple in Kumbakonam, namely Naramukha Gaṇapati (Gaṇeśa with a human face) or Adi Gaṇapati (primordial Gaṇeśa): 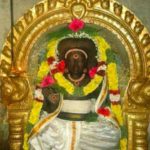 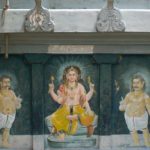 Also, the form of Gaṇeśa with a human face is found in Tiruchirappalli (Tamil Nadu), in Nandrudyan Vināyaka temple. There is another famous Uttarapathisvarasvami Mandir (Vātāpigaṇapatim).

All of these show that Gaṇeśa is not the one who simply takes us away from our human nature, he is rather able to eliminate our weaknesses in human nature and to reveal its pure and strong levels.

Today is Kṛṣṇāṣṭamī of Bhādrapadā month, for the majority this day is known as Kṛṣṇa–janmāṣṭami. But, for the śakta–upāsakas this date is also known as Kālī-jayantī. Many people have probably heard that Muṇḍamālā Tantra, Guhyātiguhya Tantra, Toḍala Tantra identify ten Viṣṇu-avatāras with ten Mahāvidyās, and according to these texts Kṛṣṇa is the manifestation of Kālī. However, the very ideas about the unity of Kṛṣṇa and Mahākāla (whose Śakti is Kālī) are also found in earlier sources, in Bhagavadgītā (11.32) Kṛṣṇa says:

I am the time destroying the worlds.

If you look at the paddhatis where the Kālī-pūjā is described, then in many of them you can find borrowing from Puruṣa Suktam, for example, in the nyāsa practice or in other elements of the pūjā. This is not accidental, because the image of puruṣa symbolises Mahākāla and His Śakti – Kālī. Mahākāla Dakṣiṇāmūrti is the Śaktimān of Dakṣiṇā Kālī. Mahākāla is the Great Time, who absorbs the very time, He is the symbol of transformation that also indicates the inner yogic process. Many interesting images pointing, for example, to the original dark nature of Mahākāla and Mahākālī, are found in other sources. For example, in Rigveda (10.129. 03):

Initially, there was a darkness immersed in a dark abyss, all this were endless waters. That incomprehensible and unified manifested himself through the power of his heat.

A similar description is also found in Dharmaśāstra, for example in Manusmṛti (1.5):

This world was darkness, immersed in a deep sleep, incomprehensible to the mind, inseparable, unknowable.

However, the darkness associated with Mahākāla, Kālī, Kṛṣṇa and other Gods and Goddesses has no negative context. It rather as the highest reality from which the creation, maintenance and destruction of the entire universe occurs. It is also known that ṛṣi of the Puruṣa Suktam hymns is Nārāyaṇa, who is identified with this puruṣa in other sources, in Śatapatha-brāhmaṇa for example. We can find many earlier sources pointing to the identity of Mahākāla, Nārāyaṇa (Viṣṇu or Kṛṣṇa) and also Kālī – the Śakti of Mahākāla. For many nātha-yogis, Mahākāla is none other than Śiva Adināth, because Mahākāla and his Śakti are very revered in the Nātha Sampradaya. The goddess Kālī grants liberation from time and worldly impermanence to those who have established themselves in devotion and the yoga path.