It so happened in India, that spiritual practices are most often performed facing east. Accordingly, the west (conditionally) is our back, the south is the right and hot side and the north is left and cold. The Sun is associated with vital power, it rises in the east and sets (i.e. disappears) in the west. We fall asleep at sunset and our senses become silent, and they turn on at sunrise. We can see basically everything that is in front of us, on the sides, below and even sometimes from above, but we cannot see our back. We can only feel it, while there should be an inversion element, i.e. direction inward, listening to our sensations inside. The west is a symbol of the extinction of activities, the completeness of them, so it is suṣumṇā. It is also no coincidence that one of the well-known traditions, where kuṇḍalinī is worshiped in the form of the Goddess Kubjikā, is called paśchimāmnayā – the Western Doctrine. Paśchima – from paścāt (behind, the last, completed, western), therefore it is a symbol of suṣumṇā, self-absorption. Thus, paścimottānāsana is focused specifically on the direction of attention and the prāṇa in suṣumṇā along with it. This āsana is also focused on the conscious activation of suṣumṇā with pratyāhāra and the awakening of the kuṇḍalinī power.

I heard from my Guru that the so-ham mantra is connected with the experience related to the sahasrāra–cakra, when kuṇḍalinī-śakti connects jīva with Śiiva. The haṃsa-mantra (inverted “so-ham”) is located in the six-cakras and symbolises the jīvātman (the eternal soul embodied in the body). Both mantras, which are essentially one mantra, have many meanings. I suppose, haṃsa, which is formally translated as “a swan”, requires special explanations of what is actually meant by a swan. You can find the essence of the haṃsa concept in one of the ślokas from the Rigveda, which is later repeated in the Yajurveda, the Taittirīya-āraṇyaka and the Kaṭha Upaniṣad (one of the earliest Upaniṣadas), the Mahānārāyaṇa Upaniṣad and others. This mantra is also found in tantric sādhana. It refers to the haṃsa – a swan, generally symbolising the sun. The sun is the source of prāṇa (the symbol of the jīva respectively), the sun – like a swan, rises on the horizon, moves in the sky and goes back to the earth in the evening. Thus, it is present both in the sky and on the earth, is also able to be under water and on its surface. It is something omnipresent, like prāṇa that pervades the entire universe. Here is the mantra from the Rig Veda dedicated to the Swan Sun (haṃsa):

The sun (swan – haṃsaḥ) located in the clear sky (śuciṣat), in the atmosphere (antarikṣasat), moving through the air (vasu), it is a priest (hotar – Agni himself) staying in a hollow (the center of the vedic altar – vediṣat), the guest (atithi) abiding in the house (duroṇasat). Dwelling in people (nṛṣat), being in the best (varasat) (that can be deities or siddhas), in the world order (ṛtasat), located in space (vyomasat), born in water (abjā, the fire inside the ocean – vaḍavānala), born of “the cows” (gojā – the sun rays), born of a world order (ṛtajā), appeared from the mountain (adrijā) – the great truth (ṛtaṃ bṛhat) (the rising sun).

The sun (savitā) is one of the main worshiping aim in the Vedas. Sāvitrī in the Vedas is a prototype of Śakti, after which it became known as kuṇḍalinī, which ascends through suṣumṇā to Śiva in the form of the light of prākāśa. The kuṇḍalinī raises the jīva (haṃsa) through the cakras and is absorbed back into itself in the sahasrāra, turning into the realisation of so-ham (I am him) in the form of Śiva.

Despite the fact that some traditions criticise methods of other sampradāya, sometimes it happens, however, that they themselves utilise them. For example, Abhinavagupta and others criticised Patañjali’s methods. Even though you can often come across the usage of methods of yoga in Kaśmir Śaivism and other tantric traditions, they are actually considered there as an integral part of tantra. In the same way as tantra, they are supporting elements on the path of yoga. I can cite a simple example of such quotations from the description of several techniques from Vijñāna Bhairava Tantra (VBT), which were commented by Śivopadhyaya. In one part, he explains a method from VBT quoting Patañjali, and in another he quotes Viveka-mārtaṇḍa of Gorakśanāth.

By blocking all channels (jñānendriyas), the force of prāṇa slowly goes upwards. Then there is a sensation like the motion of an ant, and it comes the highest state of euphoria.

First of all, it is clear that it is a description of yoni-mudrā (or ṣaṇmukhi-mudrā). Also, there is an interesting description of kuṇḍalinī movement, which is characterised as pipīlikā-calana (like the motion of an ant) in Nātha texts. That could often be found in Nātha texts in the description of Śakti uprising, in addition to some other motions like vihaṅgama (bird), sarpa (snake) etc. Furthermore, Śivopadhyaya, in his comments to this technique quotes Patañjali, where he defines prāṇāyāma.

The fluctuations of prāṇa could be outward and inward (exhales and inhales), it could also come to a standstill (of breathing). It should be observed, that this process would be elongating, subtle, happens according to time, place and quantity.

Also, Śivopadhyaya cites sutra 49, where Patañjali defines prāṇāyāma as a cessation (vicchedaḥ) of inhales and exhales (śvāsapraśvāsa). Although the term ‘viccheda’ could indeed be translated like that, I would define it in other way. It could also mean ‘cutting off’, like something that is no longer needed ‘comes off’. If the goal of prāṇāyāma is calming of consciousness and prāṇa (with which it’s connected), than it is exactly ‘cutting off’ prāṇa–vṛtti and citta–vṛtti. But, it is actually happening in a natural way with the involvement in the process of proper contemplation. Consciousness, being agitated by the sensual experience is unable to calm down, it is fragmented. Only when the practise enables an involvement in higher orientations and higher dimension, it subsides and everything in excess ‘comes off’, ‘cuts off’ by itself. It happens as at the level of sensual perception, as well as of prāṇa and mind.

Equally interesting explanation of the quotation from the Viveka-mārtaṇḍa, also the Bhagavadgītā appears in the description of a technique from VBT in the other part of the text:

With the middle of the tongue (it is the tip, if you look at it from the particular angle), pointed in the centre of something that is widely open (the head area – ‘ākāśa’), you should mentally recite the uprising sound ‘ha’, dissolving your mind in calm.

When the tongue points backwards and enters the cavity of skull, and the look is directed between the eyebrows – it is khecarī-mudrā.

Śivopadhyaya points out that it is from the Viveka-mārtaṇḍa (68), although you can come across it in many texts – it seems that many authors have copied it from Gorakśanāth. You can see it in the Dhyānabindu Upaniṣad, the Yogacūḍāmaṇi Upaniṣad, in the Haṭha Yoga Pradīpikā, the Gheraṇḍa Saṁhitā etc. It’s quite obvious that Śivopadhyaya implies khecarī-mudrā, which is known in haṭha–yoga in particular, in spite of the fact that in Kaśmir Śaivism it is also known as the practise performed inside consciousness. It is clear, that in India, some masters could claim that practises from different traditions cannot be mixed, but other gurus boldly mixes them and see their interconnection. I incline towards the latter approach. It is interesting that Śivopadhyaya quotes śloka from the Bhagavadgītā while commenting this śloka from VBT:

Leaving with external (world) the tangency (of consciousness), concentrating the look between the eyebrows, a yogin balances prāṇa and apāna.

This technique is known in haṭha–yoga as bhrūmadhya–dṛṣṭi or śāmbhavī-mudrā. It is for a reason, that it is often associated with sādhana of khecarī–mudrā. However, in Kaśmir Śaivism, this practise means the way to achieve pratimilana–samādhi, or bhairavī–mudrā (the union of internal and external spaces), that is often acquired through the practise of maithuna in kaula ritual. Then in accord with the Tantrāloka and the Mahārtha Mañjarī (the text which is connected with Gorakśanāth according to nāthas), the sound ‘ha’, which is made during mahākśobha (orgasm) – is the sound of anāhata, which dissolves (laya) the mind. However, it is more likely that in this practise it is implied ‘the internal coition’ of Kuṇḍalinī Śakti, upraised to Śiva in sahasrāra cakra, where Śakti was released in the space above the crown of the head.

All these methods, actually, could become the one unified process for those who don’t stuck in modern yoga, where everything is being ‘divided’,everyone ‘comes up with something new’ because of the obsession with markets and trade concepts.

Speaking of Rādhā, we cannot leave out her śaktimān — Kṛṣṇa. As you know, a number of Tantras correlate Kṛṣṇa with Kālī, who is manifested through him. However, Tantras are an immense ocean of the most diverse possibilities, multidimensional perception of apparently one and the same phenomenon. So for example, according to the Tantra-rāja-tantra (34/11), the Goddess Lalitā Tripurasundarī is also manifested through Kṛṣṇa: 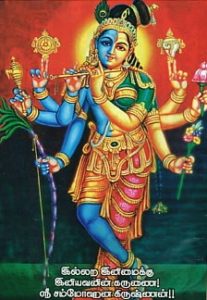 It may seem contradictory for those, who are used to dividing the  worshipping of Lalitā and Kālī in a strict way, but Kālī  could also be a part of Śrīkula. When through Śrīkula you obtain the experience of fullness, you come to the liberation from limitations of time, for which Kālī is responsible. Therefore, she is also inseparable from Tripurasundarī. We can say that Kāmakalā Kālī (the highest form of Kālī), worshiped in Urdhvāmnāya (of Kālī–kula krama), is most strongly associated with Tripura. Or, we can consider Tripurasundarī itself as Rakta Kālī (Red Kālī). Thus, we can see one reality from different perspectives. 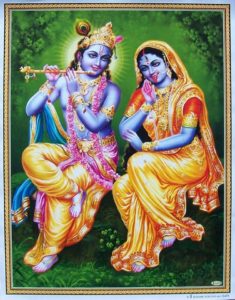 The unity of Śrī and Kālī-kula is  revealed in the story described in the kaula text the Rādhā Tantra. In short, it describes a long story of how Viṣṇu with the blessings of Tripurasundarī is embodied in the form of Kṛṣṇa, and Lakṣmī in the form of Rādhārānī (in fact, she herself is considered as a manifestation of Tripurasundarī). They both worshiped Kālī and also Kāmākhya, where Kṛṣṇa invokes Kālī into the Rādhā’s body. The first part of the Rādhā-tanra describes the famous mantra of Lalitā Pancadaśī, it also speaks of Ten Mahāvidyās, of which Tripurasundarī is the main one (tasmād daśasu vidyāsu pradhānaṃ tripurā parā). These Mahāvidyās are worshiped in a special way in Śrīyantra by experienced practitioners. The Rādhā Tantra speaks of her as giving realisation of the four puruṣarthas (dharmārthakāmamokṣadāyinī), and because of her worship in kaula-sādhana, Kṛṣṇa realised all siddhis. We know many stories about the successes of Kṛṣṇa, and all His siddhis, according to the Rādhā Tantra, were achieved through this upāsana. The text also frequently mentions  the term ‘yoga’ in relation to tantric sādhana; in the second part of the RT (ślokas 3-4), the union of Kṛṣṇa and Śakti (Rādhā) is called Śakti Yoga. The famous Hare Kṛṣṇa maha-mantra can also be found in there. There is also a description of the preliminary practice of purification (karṇa-shuddhi), the ability to purely hear the tantric mantras of Mahāvidyā. Periodically, recommendations for contemplating sacred places in one’s own body are given there (Ch. 5, ślokas 11-12 or Ch. 14, ślokas 1-2), for example, Govardhan Hill in sahasrāra–cakra, etc. It also refers to the kula-kuṇḍalinī awakening through yoni-mudrā (Ch. 15 / 19-21). Apparently, the text speaks of yoni-mudrā as the body of the Goddess, rather than the technical practice of haṭha-yoga in the likeness of ‘ṣaṇmukhi–mudrā’. Although, for a long time, it is no secret that the essential elements of tantra are also connected with many practices of the well-known and popular haṭha–yoga, the essence of which is currently understood by  a very small number  from millions of practitioners.

From my point of view, Gaudiya Vaiṣṇavism was once influenced  exactly by vāmācāra, but in a Vaiṣṇava Śakti format. In the  course of time, most likely, everything came down to formal substitutions (anukalpa) and symbolism, so the doctrine became more refined.

My congratulations and blessings to everyone. Jay Śrī Rādhe!